In this article I will introduce traits.js, a small library to define, compose and instantiate traits. Traits are reusable sets of properties and form an alternative to multiple inheritance or mixins.

A common pattern in Javascript is to add ("mixin") the properties of one object to another object. traits.js provides a few simple functions for performing this pattern safely as it will detect and report conflicts (name clashes) created during a composition. Also, a trait can specify that it can only be added to an object that defines certain required properties, and will fail to compose if these requirements are not satisfied.

There exist many libraries that add trait support to Javascript in one way or another. What makes traits.js different?

traits.js is available as a node package called "traitsjs" via npm. A simple npm install traits.js should make it available in node.js. Then load it up as follows:

This creates a local copy of the library's single exported variable, Trait. Evaluating Trait in the shell reveals the library's entire API:

As you can see from the above printout, Trait is a function. Calling it creates new traits. Here's a simple trait that abstracts equality (I will be using a slightly adapted version of the running example from the original traits paper):

By convention, we usually prefix traits with a capital T to distinguish them from regular Javascript constructor functions. Traits may require and provide a set of properties. Provided properties are simply those properties that will be mixed into an object using the trait. Required properties are those that a trait expects to be provided by its "client" (the object that uses it). In traits.js, required properties are defined by binding the property name to the singleton value Trait.required.

TEquality provides a differs property to and requires an equals property from its client. Note that differs is implemented in terms of equals, and that it assumes that this has an implementation for it. This should all be fairly familiar to any object-oriented programmer. To relate traits to more traditional OOP concepts, it is not far wrong to think of a trait as an abstract class, and to think of its required properties as "abstract" properties, to be provided by a "subclass".

The workhorse of the traits.js library is a function called Trait.compose. This function takes any number of traits as an argument and returns a single, fresh, "composite" trait that contains all of the properties of its arguments. Consider the following trait:

There are a couple of things going on here:

The following picture illustrates the composition of TCircle: 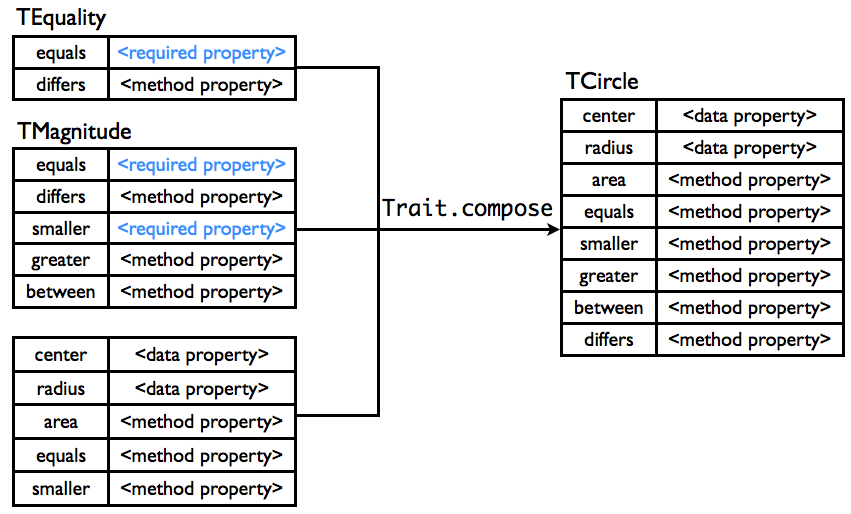 These properties sound like "nice to have" from a mathematical point of view, but they are actually crucial from a software engineering point of view: thanks to this commutativity and associativity, we as programmers don't need to understand in what order a trait was composed from its subparts, even in the case of a very complicated trait that involves a deep "hierarchy" of subtraits, possibly spread out over different files. It makes trait composition much more declarative than multiple inheritance, which requires you to do a mental graph traversal to figure out the relative interdependencies and priorities between the different superclass methods. Trait composition, at each level, "merges" the component parts into a single, larger, composite trait. All of the methods of all subparts have equal priority. But hold on, what if multiple traits define a property with the same name?

Assume we want to make our circles a bit more colorful and decide to mixin a color trait:

TColor, like TCircle, is a "stateful" trait (i.e. it is defined as a function that can take parameters to capture state). We can imagine a color trait providing much more functionality to manipulate the RGB color, but for the sake of brevity the color trait provides just a simple accessor for the RGB value. TColor also reuses TEquality and defines equals in terms of equal RGB color values. Now, the definition of TCircle is modified to additionally reuse TColor:

Both TColor and TCircle provide an equals method. Which one will get invoked on an instance of TCircle? The answer is: neither one. When Trait.compose detects that two or more of its argument traits define a property with the same name, it records this "conflict" by defining a special "conflicting property" in the resulting trait. No exception is thrown at this stage (that will only happen if a trait containing a conflict is instantiated, as explained later). The resulting trait will contain a "conflicting property" but may still be composed further with other traits, as shown below: 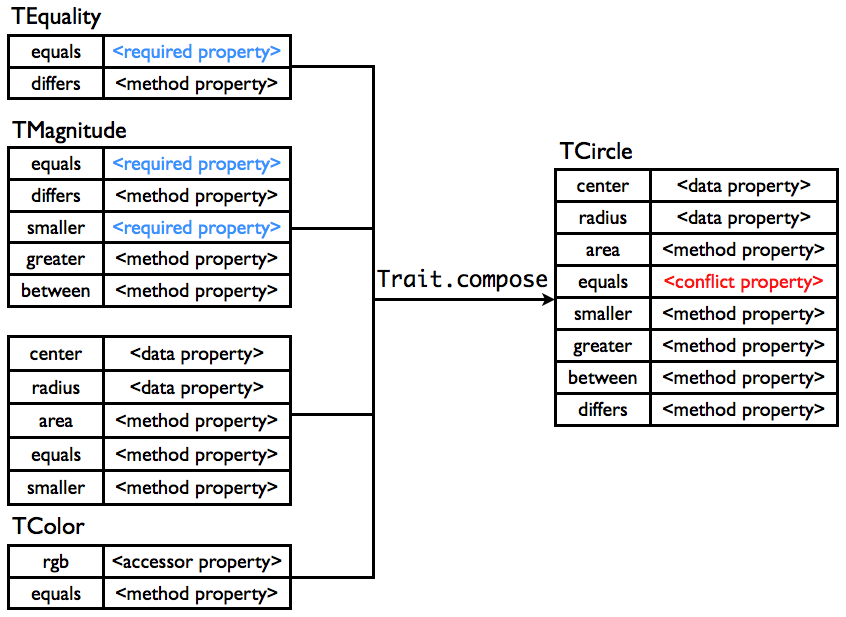 Three ways to resolve a conflict

Once we have detected a conflict, we will probably want to refactor the code to resolve it. The philosophy of traits is that it is the job of the composer to resolve conflicts. There are three ways in which the composer can do so:

The first two alternatives can be accomplished using the function Trait.resolve. Here's how one can resolve the conflict through renaming:

The call Trait.resolve({ a: 'b' }, t) returns a trait that is equivalent to t but with t.a bound to t.b instead. In the above example, we've renamed the equals method provided by TColor to equalColors. This renamed trait is then composed with the other traits, producing a conflict-free TCircle trait, as shown below: 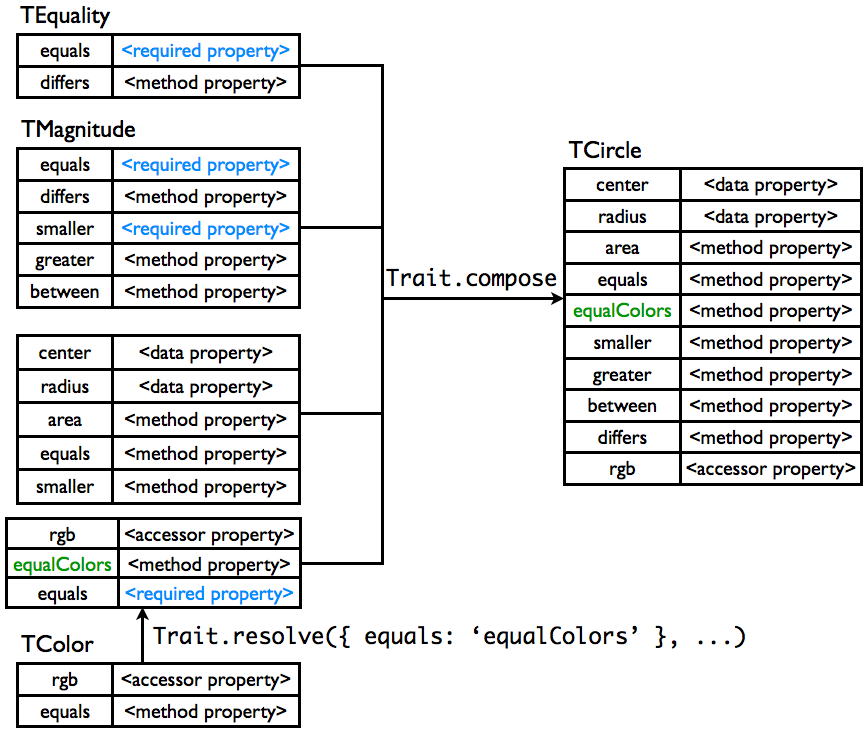 The second alternative is to exclude a conflicting property, like so:

The call Trait.resolve({ a: undefined }, t) will return a trait equivalent to t with a turned into a required property: 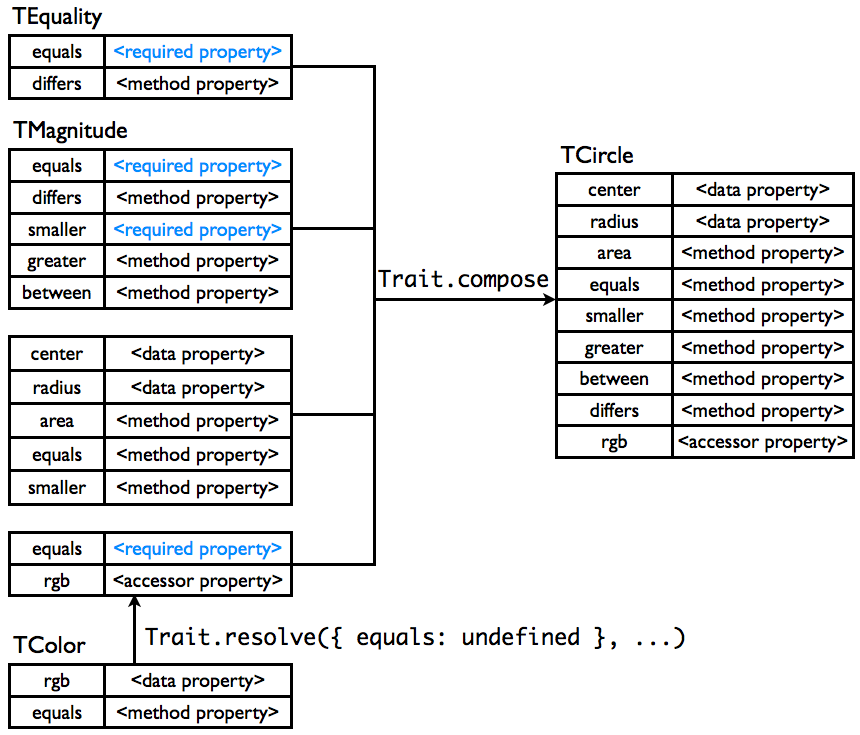 The third alternative is for the composer to explicitly specify that one of the traits overrides the properties of another trait: 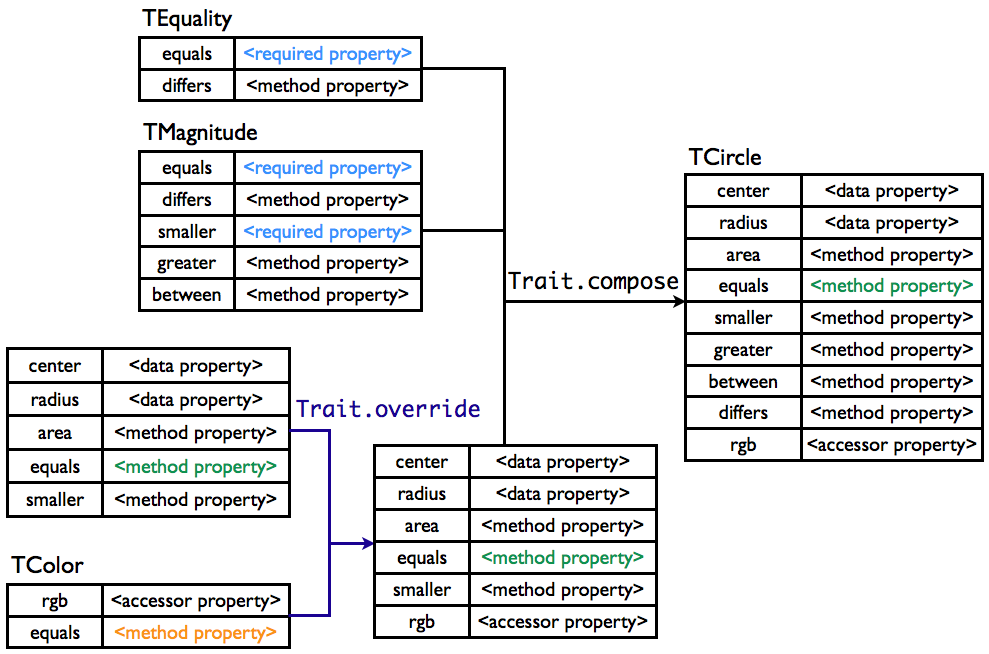 Note that the order of arguments to Trait.override matters (left-to-right priority), which is why the two traits have been reordered compared to the previous examples. This also exposes a significant drawback of Trait.override compared to Trait.compose: it's not commutative, so you'll have to pay closer attention to the ordering of things! Trait.override is very similar to "standard" inheritance (with the subclass's methods implicitly overriding the superclass's methods).

Traits can be instantiated into objects using the function Trait.create:

Now we can start creating and using circle objects:

Object.create is provided as a built-in in an ES5 engine. On ES3 engines, traits.js defines it. Next, let's look at how instantiating traits using Trait.create and Object.create differ.

In addition, traits.js ensures that the new trait instance has high integrity:

Since Object.create is an ES5 built-in that knows nothing about traits, it will not perform the above trait conformance checks and will not fail on incomplete or inconsistent traits. Instead, required and conflicting properties are treated as follows:

Object.create does not bind this and does not generate frozen instances. Hence, the new trait instance can still be modified by clients.

It's up to you as a programmer to decide which instantiation method, Trait.create or Object.create is more appropriate: Trait.create fails on incomplete or inconsistent traits and generates frozen objects, Object.create may generate incomplete or inconsistent objects, but as long as a program never actually touches a conflicting property, it will work fine (which fits with the dynamically typed nature of Javascript).

In the introduction I mentioned that traits.js is minimal. All in all, you only need to know four functions to work with the library:

That's it. There isn't much more to it. The complete API and another tutorial can be found on the traits.js home page. If you want to peek under the hood of the library and know more about the format in which traits are represented, this page provides all the details.